KNOWLEDGE BASE Education In Germany

Germany has an effective educational system, with some of the most favorable statistics in the Organisation for Economic Co-operation and Development, or OECD, in the areas of education and employment .

The OECD is made up of 35 countries from around the world, including Germany, the United States, Japan, Australia, Poland, Israel, and Mexico - just to give you a sense for the diversity.  Many of the German educational statistics you will see in this section and others are from the OECD, and many measures are shown as compared to the OECD average.

Before we look at some of the numbers, let’s take a minute to review Germany’s education system.  In simplified terms, Germany has two different educational ‘tracks’ - an academic track leading to an academic college or university (called Tertiary - Type A in this section), and a vocational track leading to vocational training, an apprenticeship and a vocation (called Tertiary - Type B in this section).  This approach has been very successful for Germany and affords its students options that are aligned with their interests and talents.  You can learn more about this system on Wikipedia.

Over 9 out of 10 German 3 and 4 year olds are in early childhood education programs.  The majority of those children attend programs that, while government-dependent, are not public institutions.

At 86%, Germany has one of the highest percentages of people with at least an upper-secondary education.  Think of upper-secondary as the equivalent of having finished high school in the US, keeping in mind that some of these students will have gone the academic route, while others the vocational route.  With a projected 95% of today’s young Germans expected to complete some form of upper secondary education, nearly half are choosing the vocational path.

One of the interesting numbers you’ll see in the chart below is that only 3% of Germans with a general upper secondary degree don’t continue on for further education, a very low number compared to the OECD average of 12%.  This number is a good indication for how the German vocational/academic split works.  The general upper secondary degree is intended to lead to further education, not directly into the labor market.  If a person wants to go into the labor market without continuing academic studies, they will likely have chosen a vocational track.  Therefore, if a person has taken the more general route, it’s less likely they will just stop there. 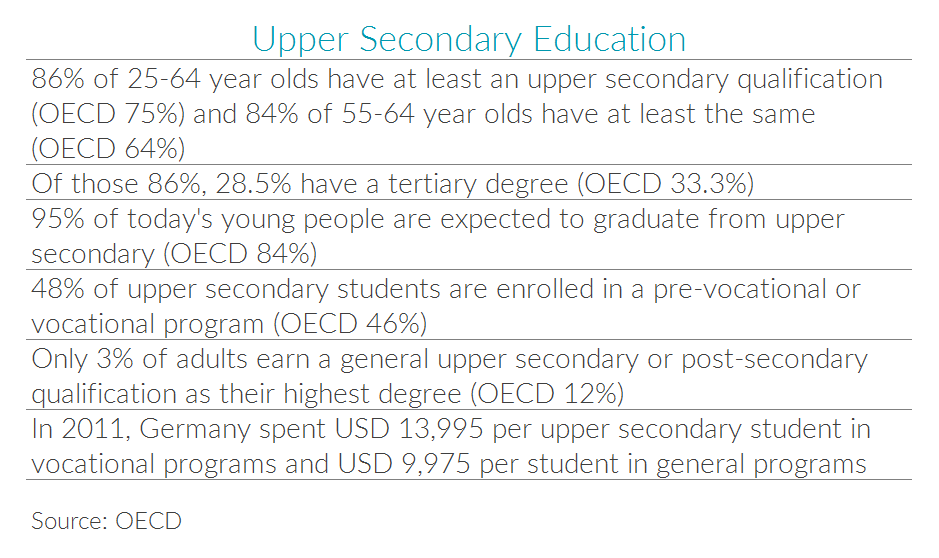 Though the upper secondary (which includes both upper secondary and tertiary) achievement rates are very high for Germany, the tertiary portion of that is actually below the OECD average.  One reason for the lower tertiary participation could be that the upper secondary vocational programs are so successful that fewer people feel the need to continue their education. 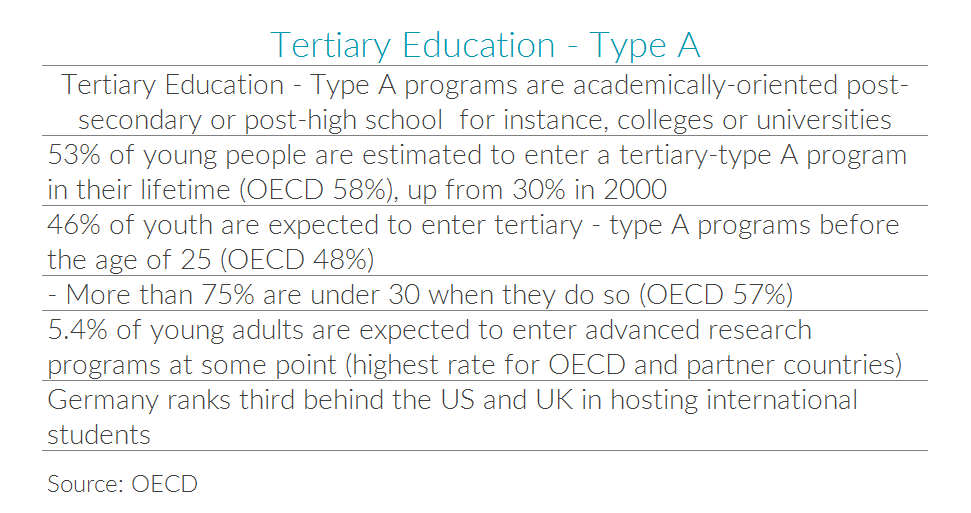 Germany’s unemployment has actually declined since 2005, although the less education one has, the more likely  they are to be unemployed. Even with the disadvantages of a lower education, Germans still have a lower unemployment rate at all levels of education than the OECD average. 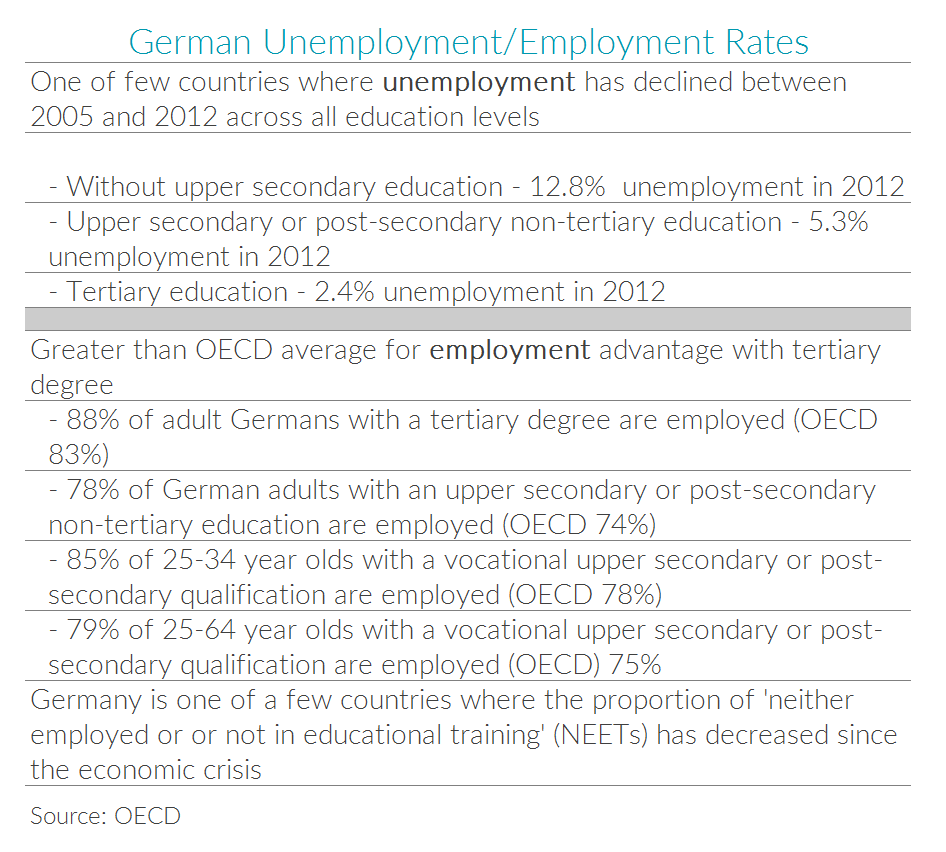 German women enter the sciences in tertiary education more than in other OECD countries and earned 44% of the degrees in 2012.  In fact, they actually earned a higher percentage than men in math and statistics degrees.  Between 2000 and 2012, the proportion of degrees earned by women in the sciences (including life sciences, physical sciences, mathematics and statistics, and computing) grew by at least 10%. This growth rate puts Germany in the company of just 4 other countries, including the Czech Republic, Portugal, the Slovak Republic, and Switzerland.

Though they have parity in education, German women with similar levels of education are earning less than men. And while they may have a greater share who are working part-time, other indicators suggest that they are not being paid equally for equal work. The World Economic Forum’s Global Gender Index 2014 reports that there is still a gap in wage equality for similar work in Germany. 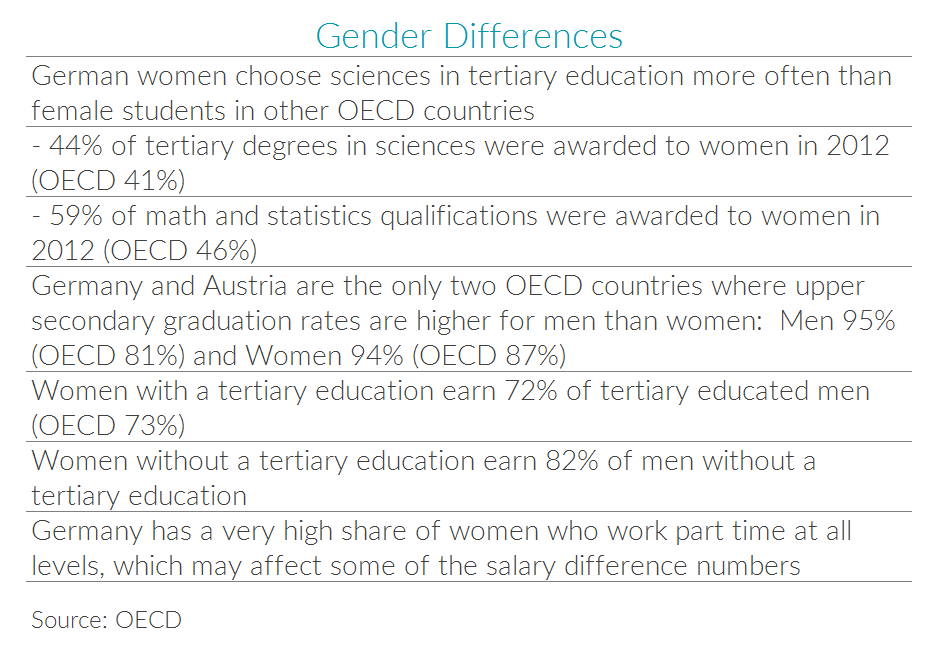 OECD Education at a Glance 2014 - Germany

KNOWLEDGE BASE Education In Germany