KNOWLEDGE BASE Language Localization For The US

Language Localization For The United States

Language localization is the process used to adapt the language used in a product or service in one country to fit the language and culture of another country so that it feels natural, as if it was made in and for that country.

If you are bringing your product or service to the US and are  from an English-speaking country, you are already one step ahead. English is the language of most business in the United States. But there are still some things you’ll need to consider when you are localizing the language for your products or services. Don’t just assume that the English spoken in another country is the same as that spoken in the United States, or you could be undermining your success.

And if you are coming from a country where English isn’t the primary language, you will also want to learn more about preparing to enter the US market.

Differences in English between countries and US regions

Even though it may all be English, there are still identifiable differences to be aware of if you are localizing for the English language.

American English is not the same as British English

There are many common words that are spelled or used differently in American English versus British English.  As mundane as it sounds, people notice when words are not what they are expecting. There is a noticeable difference between, “Get out your chequebook! Aeroplane tickets are on sale for your summer holidays!” and, “Grab your checkbook! Plane tickets are on sale for your vacation!” Stilted conversation aside, unless you are trying to capitalize on not being local, use the American spelling and word choices in your online content and written communications.

To help you think about what words to be on the lookout for, here’s a guide with some common differences between British and American English. 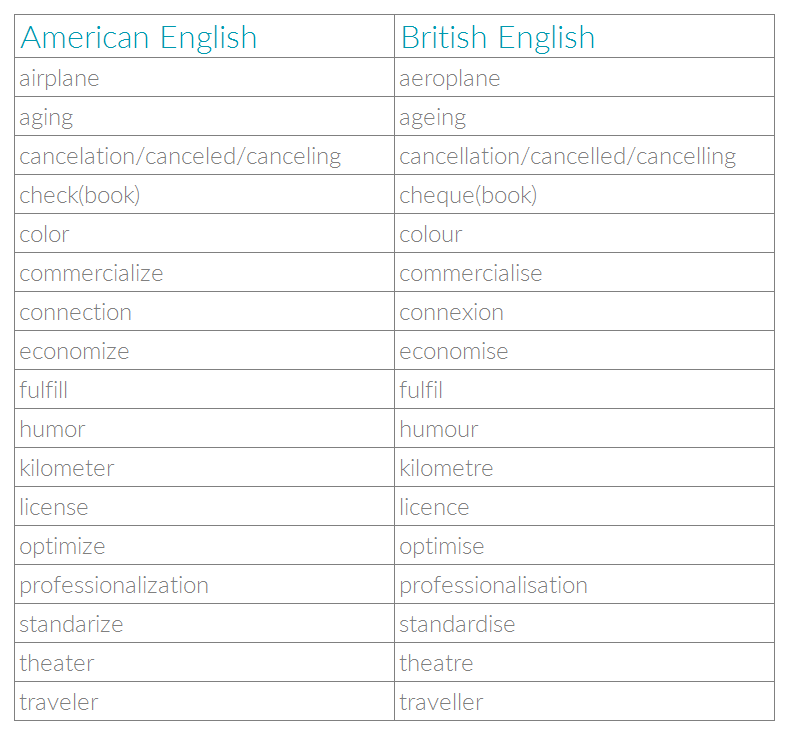 There are some rules that can help you understand where you could see differences in spelling between American and British English. You can use this as a guide to help you spot words that you would localize for the US market.

You can easily find lists of words that differ between the two languages to help you review your copy, but definitely do a review and get local help in the form of experts or even trusted friends, at a minimum, to make sure that you have properly localized the language you are using.

Once again, though the US and UK are both English-speaking countries, there are different words for commonly eaten foods.  For instance, chips and french fries.  French fries is to the US what chips are to the British.  And chips to the British conjure up images of potato chips to us, except for ‘fish and chips’, which we’ve adopted rather than using ‘fish and fries’, at least when meaning what we all think of as the very British meal.

Another difference is cookie versus biscuit.  What Americans call a cookie is called a biscuit in the UK, and Americans think of a biscuit as something entirely different again.  If you are writing about food and have any doubts, enlist the help of a local to make sure you are using the correct terms.

Now that we’ve discussed the fact that American and British English are not the same, it’s time to acknowledge the regional differences in word choice and accents. For instance, the Midwest calls carbonated drinks “pop”, while it’s called “soda” in the Northeast and West, and the South calls it “coke”. To refer to a group of people, the northern regions generally say “you guys”, whereas the South says “ y’all” or “you all”. Are exercise shoes called “tennis shoes” or “sneakers”? It depends on the part of the country. And the last meal of the day could be “dinner” or “supper”?

Accents also vary by region, some of which are quite distinct and recognizable. Spoken American regional accents can be used to intentionally represent a specific section of the country, or could be chosen to reflect all people -  or none in particular.

Depending on what region of the country you are targeting, be sure to get local assistance to make sure the words and accent you are using reflect the regional preference - or help you find a version that is generally accepted everywhere.

Ways to localize your site for language

Here are some steps you can take to localize your site, app, product, or service for language in general and specifically for the USA.

Identify and Remove all Slang before Translating

If you are going to use a language other than your own on your website, app, or marketing materials, it’s often not enough to use the free translation tools to translate your site or app. Context and meaning don’t necessarily directly translate very well. If you are on a tight budget, you can use a free translation tool such as Google Translate. There are steps you should take to improve the accuracy and likelihood that your app isn’t complete gibberish, and it’s a good idea to get a local to review the translation to verify that it makes sense.

Here is an example for how a German phrase meaning, “I don’t have any interest in that”, is translated to something that just doesn’t make sense.

Grab all of the copy on your website and app and review it to see if you’re using terms and sentences that are not direct descriptions and only have meaning in your own country and region. If you can find a local student or other trustworthy person, have them review your copy as well to look for anything that might confuse, inadvertently insult, or turn away a local potential customer.

You will have some words or phrases in your language that would not make sense if directly translated into English. Here are some examples of things we say in the US that probably mean absolutely nothing elsewhere:

Use a Translation Service

As you can see from this Google Translate example, a direct translation doesn’t always work, even when there isn’t slang. Telling someone in German to “ have a good day and to have fun skiing” comes out as a pretty confusing translation. A more sophisticated approach is often called for.

If you have just a little budget, by paying a couple of hundred dollars you will have a much more accurate translation using one of the new translation services that are either all human translation by locals such as VerbalizeIt, or combined machine and human translation such as Localize JS, a 2015 Techstars company, and Gengo, a 500 Startups company. All of these offer much higher quality translations at a reasonable price.

Before you start translating your content, think about those things that actually shouldn’t be translated - they should be updated for the local market. For instance, contact names, addresses, and phone numbers fall into this category.  If you are selling  a limited product or service line in this market, remove those from your site or if you can’t remove them, be clear that they are sold in limited markets.

Sites with Multiple Language Versions or with Mixed Languages

Even if English is the primary language of your site, you may want the flexibility to offer other languages as well. Google.com.sg, the most visited site in Singapore, gives users the option to toggle between 4 different languages. 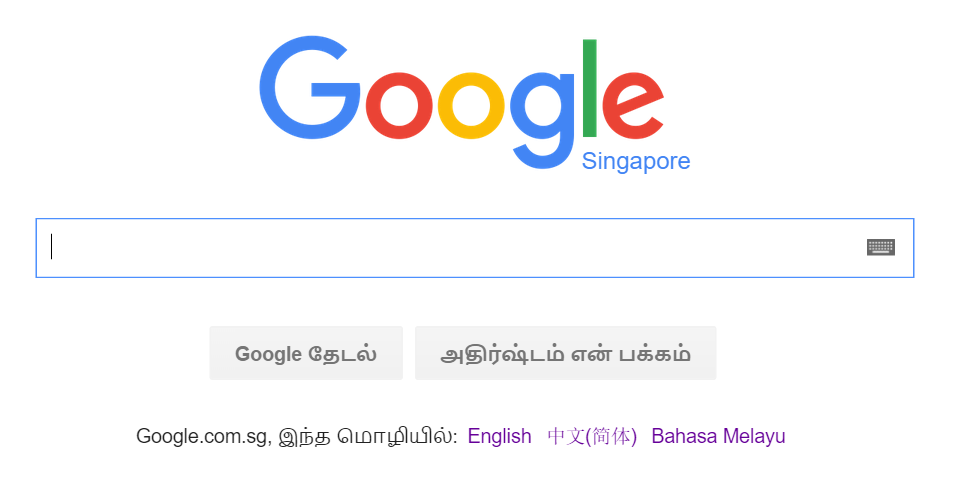 Hardwarezone.com has five different country versions, three in English and the two in other languages. Since Hardware Zone markets to consumers in multiple countries, it has localized its site for multiple languages. Depending on which country is selected in the footer, English or another language will be presented.

Another option is to offer multiple translations in one place.  While it implies some coding requirements, it does get the job done in view. This welcome email from Trendwatching.com offers up the welcome message in more than one language at once, including the English in which it was sent. 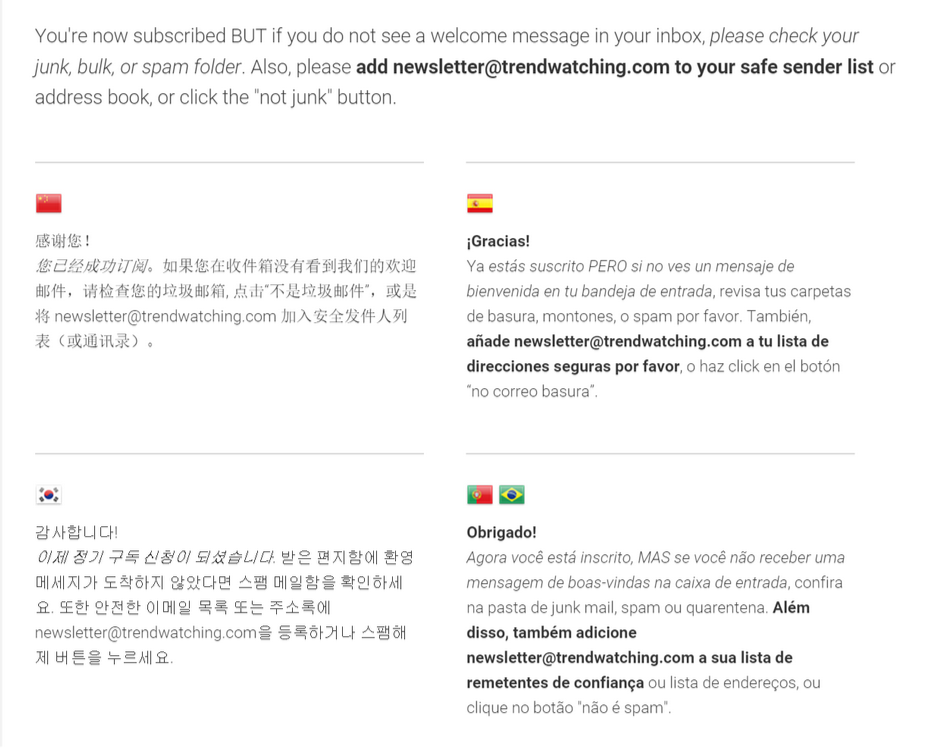 Other top sites, such as Facebook and YouTube, are platforms that are essentially localized by their users, who enter content in their own languages. The sites are coded to allow for multiple languages.

Stick to One Language per Page

Google does not read the language coding on pages and will try to work the language out by itself. Therefore, it recommends that you use just one language per page. Since your SEO strategy is tied to the words on your page, increase your success by minimizing how much you use more than one language on any page.  Instead, develop pages for each language that you use.

Having some sort of international appeal can be attractive and using a mix of languages on your app and website might be the best approach for you. Even with B2B companies where English is the default business language, it’s probably helpful to have detailed information in the local language but headlines and promotional copy in English. For more information on how to make sure your site is built to support multiple languages and accessibility in multiple languages, see our section on Structural Product Localization.

You are probably getting the idea that it’s not a good solution to just use American terms and spellings without giving it some thought.  Just as with the people of any other country, Americans notice the subtle (or not so subtle) differences in language.

KNOWLEDGE BASE Language Localization For The US

Lingo24 is a translation company that believes in providing cost-effective localisation solutions to support clients' international ambitions. We focus on developing our own technology...

Who we are: Wordbank is a privately owned, boutique marketing localization agency, specializing in global marketing communications since our beginning in 1988....

We provide translation services and software localization for companies, organizations and individuals worldwide. Our mission is to simplify your translation needs so you can focus on what...